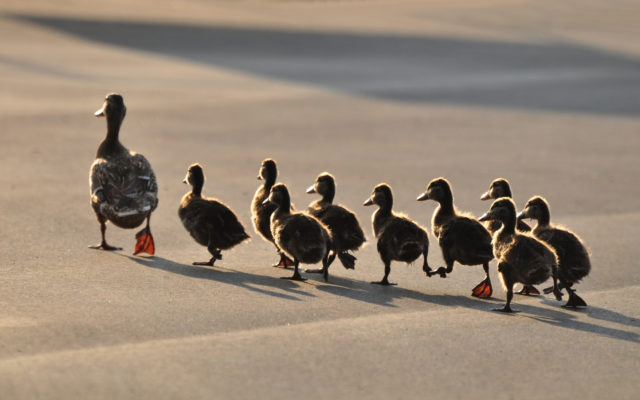 I know this is out of the U.K., but…I have heard some Bakersfield ducks and some of them have twangs.

From LanguageTraining.com via The Washington Post (that has a paywall):

“research suggests that the overwhelming majority of animals are born knowing how to speak their species’ “language”. It doesn’t really matter where those animals are born or raised, because their speech seems to be mostly imprinted in their genetic code”. However, there is some evidence that some animal species have something similar to regional accents or dialects. For example, sperm whales in the Caribbean use a different clicking pattern to those in the Pacific and Ornithologists can immediately identify a white-crowned sparrow’s place of birth from its song.

Further research showed that ducks have something akin to regional accents too. According to an article on the BBC website Cockney ducks make a rougher sound than their Cornish counterparts so that their fellow London ducks can hear them over the rumblings of city noise. Researchers at Middlesex University found that the Cornish ducks made longer and more relaxed sounds.

So, not accents like us, but their own kind?

Random Fact: 40% of Cats are Left-Pawed

Puppies Are Born Knowing How to Love Us!

Elephants Only Need Two Hours of Sleep Per Day

The Most Misspelled Word of 2020

January 26th, 2022
View full playlist
Connect With Us Listen To Us On