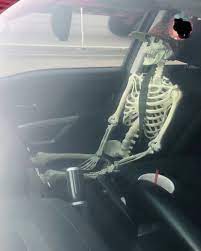 I may or may not know of someone who has done this with a ventriloquist dummy. *shifts eyes*

One Houston driver has been deemed “bad to the bone” after being caught with a special passenger in the carpool lane: a skeleton!

A driver in Harris County tried to pass off a skeleton as a passenger in an attempt to use the carpool lane.

A photo shows the boney passenger buckled up and wearing a hat.

The driver reportedly claimed he was just a fan of Halloween and was not paying attention to the carpool lane.

What is the weirdest thing you have ever seen while driving?